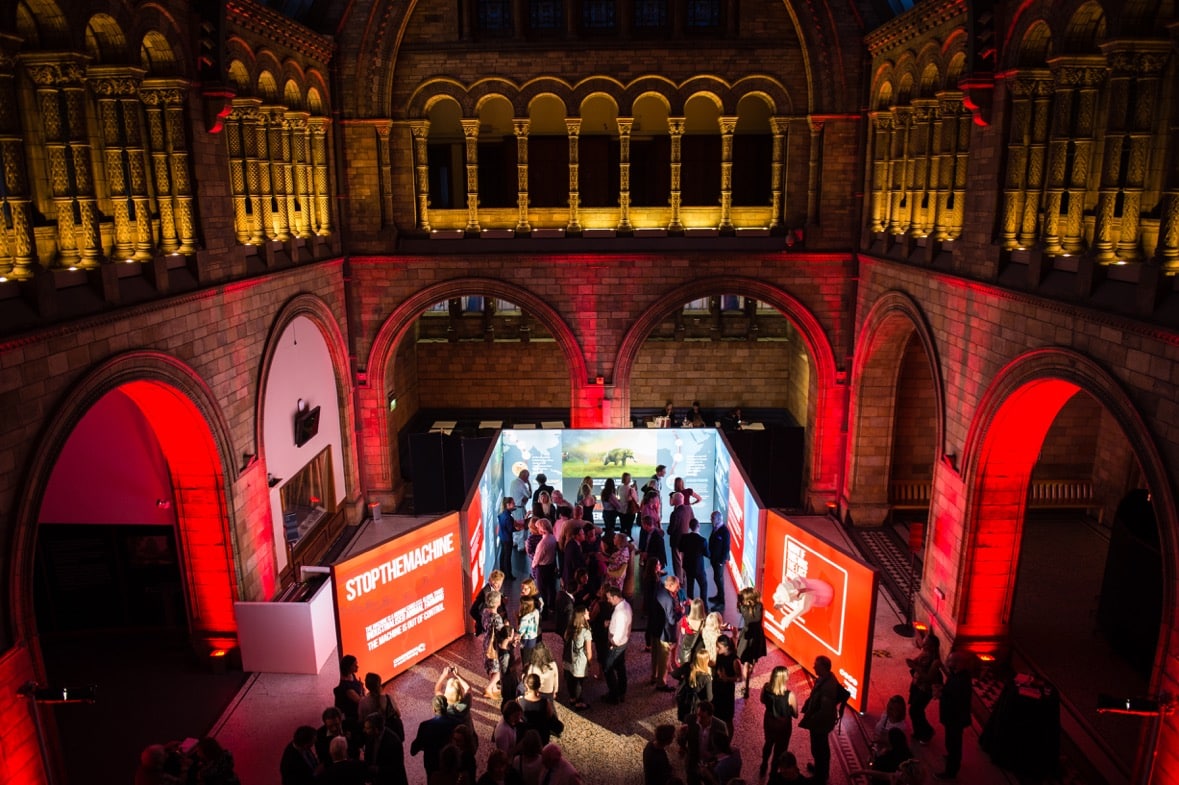 We were contacted by Kate Bowen at UP Studios, who were creating a campaign for Compassion in World Farming to highlighting the issue of industrial farming. Her concept was to create a roadshow unit which would tour prestigious venue throughout the UK, starting with the Natural History Museum in London. The brief was to supply a big 5m square illuminated box with hinged doors as a reveal and interactive iPads in the centre for their presentation.

Kate specialises in creating campaigns for ethical businesses using a variety of media from videos and animation to live events, we were thrilled to be involved and worked with her to provide a modular solution that could be put up quickly by the Compassion in World Farming team. We love working with clients like CIWF because their values align with ours, read about our commitments to sustainability here.

We specified the Octanorm modular system for the wall frames, as it can be assembled with a single Torx key and the locks are incredibly strong and perfect for multiple long-term use. They have an enormous range of components which allowed us to light both sides of the walls, hinge the doors and even put roller balls on the base of the 2.5m wide doors.

The graphics were printed by dye-sublimation onto fabric and stretched into the frame, which meant that they can be packed up really small, plus they can even be put in the washing machine to give them a clean if required.

To facilitate running cables to the central display, we made up a printed Cableflor supplied in metre squares, so there was no covering required, saving on time and waste – this allowed the iPads to be on continuous charge throughout the day.

Kate commissioned a cardboard sculpture of a jaguar that we had to fix to the fabric walls, without creating any shadows in the illuminated graphics – not particularly easy considering it cantilevered out by 800mm, but we found a way!

We did a complete pre-build of the unit beforehand, in our premises and also with the team from CIWF at the beautiful UP Studios by the Regents Canal in Islington. Time was incredibly limited at the campaign launch taking place at the Natural History Museum – we only had 90 minutes to unload, carry upstairs and build.

Using a six man team from Gallowglass and our own team of six, we paired up and completed ahead of time.

You can watch the promotional video that UP Studios made of the build and the live event here.

The event was a huge success and made the national press.

As a modular solution, the box was adaptable depending on the size of the venue:

Following the success of the campaign, Kate asked us to create a smaller lightweight version that could travel around Europe. This time we proposed a circular modular unit, again made from Octanorm, with double-sided printed banners that slid into the frame work top and bottom.

Cable management went through the system so we were able to power the iPads and fit long armed LED spotlights to the top of the frame. We did a customary prebuild and demo at the CIWF offices in Godalming, Surrey, then completed the first installation at a UK University.

The following year, CIWF wanted to repurpose the unit for a new campaign, highlighting the issue of industrial fishing – Kate designed all new video and unit graphics, which we ran out on dye-sub again and pre-built the whole unit prior to going on site.

This time we took it to The European Parliament in Brussels, so that it would go straight to attention of MEP’s.

The jaguar sculpture was replaced with a leaping salmon and the event was a huge success.

AT CABLEFLOR WE CAN PROVIDE A BESPOKE DESIGN SERVICE TO HELP YOU CREATE AN IMPACTFUL ROADSHOW OR EVENT UNIT. TO DISCUSS YOUR UPCOMING PROJECT CALL US ON 01293 853517 OR SEND US AN EMAIL AT SALES@CABLEFLOR.CO.UK.

This website uses cookies to improve your experience while you navigate through the website. Out of these, the cookies that are categorized as necessary are stored on your browser as they are essential for the working of basic functionalities of the website. We also use third-party cookies that help us analyze and understand how you use this website. These cookies will be stored in your browser only with your consent. You also have the option to opt-out of these cookies. But opting out of some of these cookies may affect your browsing experience.
Necessary Always Enabled
Necessary cookies are absolutely essential for the website to function properly. This category only includes cookies that ensures basic functionalities and security features of the website. These cookies do not store any personal information.
Non-necessary
Any cookies that may not be particularly necessary for the website to function and is used specifically to collect user personal data via analytics, ads, other embedded contents are termed as non-necessary cookies. It is mandatory to procure user consent prior to running these cookies on your website.
SAVE & ACCEPT
0
0
Your Cart
Your cart is emptyReturn to Shop
Continue Shopping